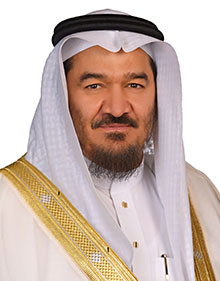 He have been awarded in June, 2003 the Professorial ship in health systems and quality (Adjunct Professor) from Oklahoma University, USA.  I got the fellowship in medicine in 2007 (FRCP). At the beginning of 2010 he received the Professional ship degree from Imperial College, London – UK.

He is a Family and Community Medicine Consultant & Prof of Public Health.

He was the Director General, Executive Board, Health Ministers’ Council for the Cooperation Council States for more than 16 years. He is now the General Secretary of the Arab Hospital Federation, as well as Deputy Chairperson of Arab Union Anti -Forgery and Counterfeit.  He is a member of the Board of Islamic Organization for Medical Sciences. He is the chairperson of the Saudi Epidemiology Society.